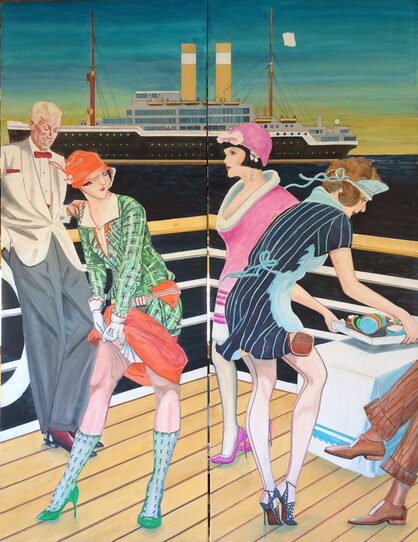 I was offered a commission that spun my mind back to a dark, snowy mountain amidst an avalanche?

In 2012, Tony Marsh, asked me to do a commissioned piece for his new home in Barbados. He wanted a five-by-four-foot brightly colored Toucan. It was completed and delivered packaged in a roll in six weeks. His interior decorator re-stretched the canvas and hung the work in its spot in the dining room. You can go through his stunning home by typing “Marsh Mellow Barbados” in Goggle or your Explorer.

He called in October, 2016 asking if I would be interested in creating another commissioned art piece for his new home under construction in Bermuda.

This was the same Tony Marsh who, over 20 years earlier, was my business partner in LottoSoft, the lottery kiosk project. When he left the hospital after the horrendous accident in the Ferrari that left two dead, Tony was incarcerated for a year. We had kept in touch.

A couple of years passed and he called me out of the blue from Whistler. It was Friday noon. Tony, Pat and the girls had arrived at 9:00 a.m. from London and just checked into the Chateau Whistler. The girls wanted to go skiing. He suggested I jump into my Jeep, head to Whistler and meet him at the top of the Red Chair at 2:30 p.m. I got there 10 minutes late and we greeted. When I bent over to tighten my bindings, he disappeared into new powder on the south face, an out of bounds zone. If I could catch him, we would have to hike uphill for half an hour to get back to the trail.

About the time I got to him, an avalanche broke loose. We were very fortunate to traverse the moving snow into the trees and out of danger. When the slide calmed, it was obvious we couldn’t retrace our steps. We would have to walk and climb down the south face of Whistler in the blackness with the snow falling.

As luck would have it, I had hiked and fished in the Cheakamus River and Lake below us. After slipping, sliding and falling for four hours, we reached the river and I put my face into a cold mountain stream. It was 7 p.m. and I could see the ski patrol tractors searching for us a couple thousand feet higher.

I knew the river traveled west then turned south near the highway to Squamish. When we got there about 1 a.m., we had to go up a 45-degree wall of snow, ice, rocks, brambles and trees. With one ski and two poles each, we would put one boot into the snow, raise ourselves, eat some snow and repeat until 3:30 a.m.

The moon emerged revealing about 20 acres of a gently sloping tree farm with hundreds of evenly spaced five to six feet high fir and pine saplings.

At this point, Tony sat on a rock and said “well, Richard, my Platinum Card isn’t going to get us out of this one, is it?”

At least now, I knew where we were. The trees under us were 20 feet high and we were walking on a 15-foot snow base. The over-swept logging trail was dead ahead through a ditch and over the fence.

We reached the highway at 5:30 a.m., hitchhiked to the RCMP headquarters by 6:15. The ski patrol reprimanded me for putting a United Kingdom visitor in danger and said they had found cougar tracks that followed ours.

Back to the phone call. Of course, the answer was yes, I’d love to do another commissioned piece. I asked what he had in mind. He said he wanted two canvases six and a half feet by two and a half feet that worked both together and apart. The theme was the late 1920s Flapper era, he liked blue, the ocean and wanted it by January 5, 2017.

With those instructions and knowing the patron, I worked up a couple of roughs and sent them on. He chose one and, after agreeing on the price, I set to work.

My studio, as mentioned earlier, was a converted three-car garage under our town home in Fairview Slopes, Vancouver. Due to the overall size of the works, I did the initial drawings on stretched canvas hanging the two pieces from my garage door. As we spend winters in Cabo San Lucas, Mexico, I removed the staples and rolled up the two canvases for the southern journey Nov 1.

In my amigo Paco's studio that he graciously shares, I rebuilt the stretcher bars and remounted the 2 canvases. I worked five hours per day, four days per week and finished the work on December 24th. (See illustrations two, three and four.)

That was just part of the journey. To ship from the Baja Peninsula to Barbados sounded like it should be easy. Remove canvas again from stretcher bars, roll up both, place in a plastic pipe, seal the ends and address. Go to Fedex and send with appropriate insurance.

My patron now wanted the package shipped to Belgium with no duty on artwork. I repackaged and readdressed the art, inserted it in a simple cardboard box and drove into Cabo to the shipper.

On the way, I received an urgent text requesting package be sent back to Barbados and addressed to Tony’s friend with a maximum $200 insurance and a nondescript shipper. I had to readdress and repackage for a third time.

Message to artists: No insurance for the value of the work means the artist takes all the risk. After a serious discussion, Tony agreed to pay 50% of the value should the paintings be lost or stolen in shipping. If you are sending art out of the country make sure the purchaser is aware that the buyer may be responsible for import duties depending on the destination country.

The paintings were shipped as instructed and finally arrived via Mexico City, Houston and Miami to Barbados. They cleared customs at no cost as used draperies. Quell journey!

The paintings were invoiced and paid for. All three hang proudly at Marsh Mellow, St. James Barbados. 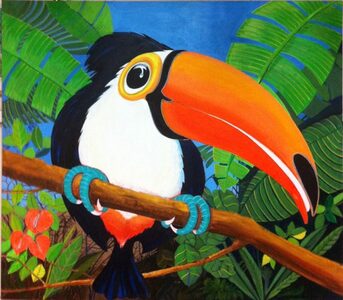 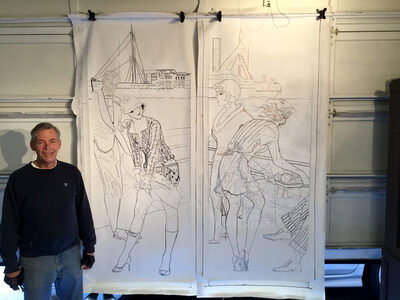 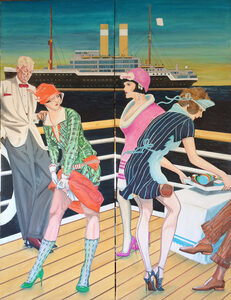 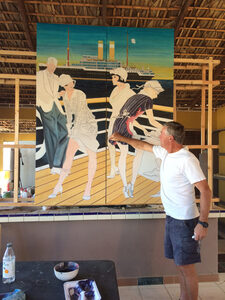 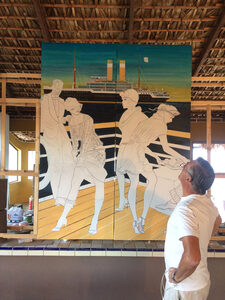 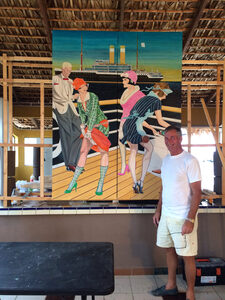 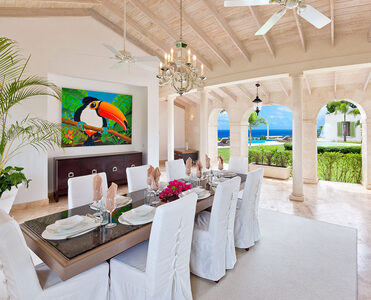